The Spirit of Hostelling

Sofia, the capital of Bulgaria. This is where I would be spending Christmas.

The cold air nipped at my neck like an animal, threatening to penetrate my multiple layers of winter clothing.

I jumped off the bus and headed into the town, passing a statue of some communist leader with an arm outstretched to the sky.

The city was bustling, lovers strolled arm in arm, mothers fussed over children bundled up under woollen hats and scarves, men wandered through the streets, cans of beer to hand.

I made my way to Hostel Mostel.

Another Christmas away from home, perhaps my fifth or sixth, but this could be different.

The low-season was in full swing and Europe was deserted.  I had been lucky enough to meet some truly amazing people over the last couple of months but, in many of the hostels I had crashed in, there had not been too many folks around.

I very much wanted a good bunch of people to spend Christmas with.

I adjusted my pack, scrunched up the weird feelings of angst and strolled over to the door. 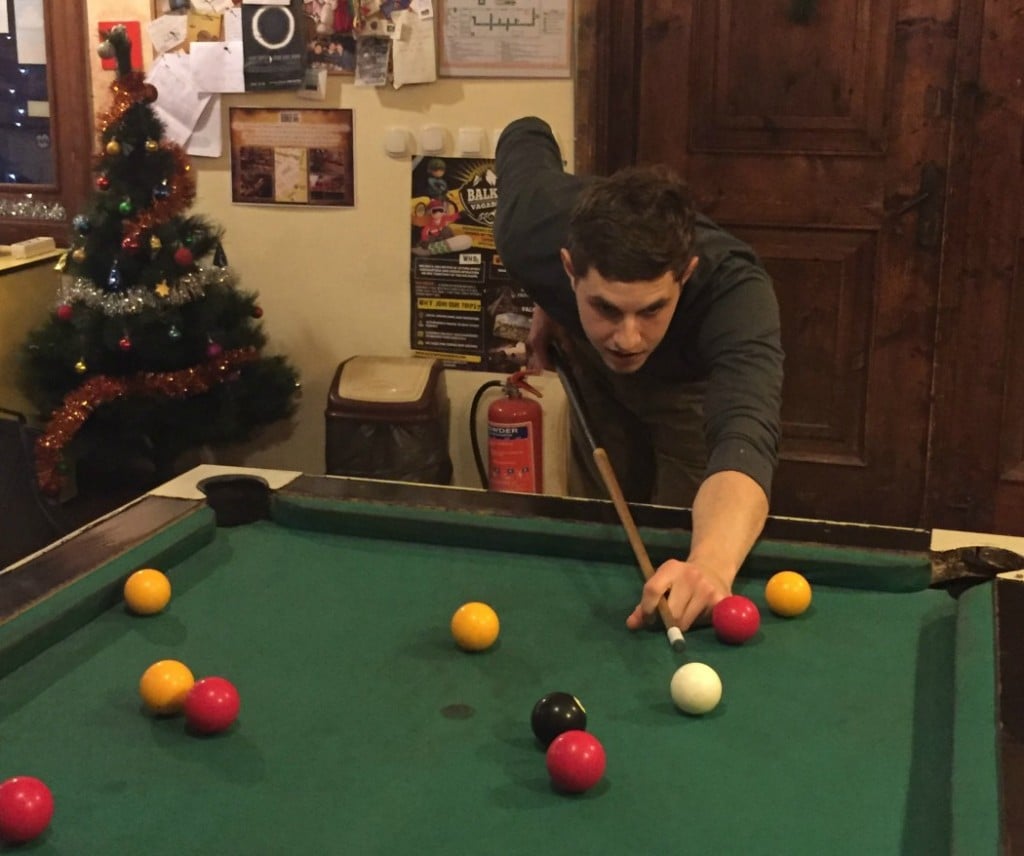 Inside, I was instantly met by the incredibly friendly receptionist who poured me a coffee, bade me sit down and launched straight into the hostel gossip as if I was an old friend.

He showed me around, explaining that we could pretty much do whatever we wanted for Christmas and challenging me to a game of pool.

I found my mate Jazza, another adventurer and one of the two bloggers over at Nomadasaurus and we excitedly swapped adventure tales.

Jazza and I had been chatting for years over Facebook so it was good to finally meet him and have a buddy to spend Christmas with.

It quickly became apparent I had nothing to worry about; this was going to be a kick ass Christmas.

Slowly but surely, we were joined by other people within the sprawling common area.

Lilian, from Australia, a prim and proper girl who would prove to be absolutely hilarious once she had a glass of wine in hand.

Ruby, a twenty-something adventurer, again from Australia, on a whirlwind blast across Europe after studying in Spain for a couple of years.

Disney, yep, that’s his real name, an ex-marine driving a van across the world.

Grum, a true inspiration, a kiwi chap 500 days into his round the world cycling trip aimed at raising money for cancer.

An Iranian lad, more Australians (because they are god-damn everywhere), and a gaggle of locals who may or may not have worked at the hostel; it was a very chilled vibe.

We had a few drinks and made our battle plans.

Fourteen of us. One cooker. We were going to make this happen…

The next day began with an early morning workout, led by the marine, which pretty much kicked my ass but allowed me to feel that it was OK to start drinking at 10am.

I wandered into the hostel to cries of ‘Merry Christmas’, assailed by all sides by handshakes and hugs from people I did not know.

The day tumbled on, we drank coffee liqueurs, beers, wines.

I played backgammon, jenga, and drink-the-beer with my fellow backpackers.

This was an eclectic bunch of people indeed, I learnt a little about everybody. Many cool stories were told.

I felt lucky, this hostel had bought us all together. This is what hostelling is all about; meeting cool people and sharing experiences.

I was in charge of the chickens; I god-damn nailed it.

I found myself sitting next to Grum, the oldest and definitely the wisest of our small group, chatting at a million miles an hour, asking him about his life, his adventures, how the heck he got himself out of bed to cycle every day – I felt inspired.

I looked around the room; vagabonds, backpackers, travellers, students, pensioners, locals, bloggers and folks simply out in the world looking for something.

We had all come here as total strangers.

An impromptu pool competition began and then, suddenly, out of nowhere, we were headed to a reggae bar.

We wandered the brightly lit streets of Sofia, passing the illuminated cathedral, the parliament building with it’s fearsome bronze lions and the local mosque.

Time slipped by as we weaved and bopped to the soft tunes of the reggae bar, smoke hanging heavy in the air.

I hugged my new friends for the hundredth time, good vibes spilling forth from everyone.

We had all thought the same – what the heck was this Christmas going to be like?

Alone from home. On the road. Nobody to buy presents for. Nobody to wake up next to upon a frigid Christmas morning.

Hands down, this has been one of the most memorable Christmases of my life, I could not have asked for a cooler bunch of people or a more welcoming hostel to spend this time of the year with.

A massive thank you to all of the incredible people I spent Christmas with, to the friendly staff at Hostel Mostel and to my incredible sponsor Hostelworld for putting myself and Jazza up over the festive period.

https://www.facebook.com/thebrokebackpacker
https://twitter.com/wandering_will
Writer and entrepreneur. Adventurer and vagabond. Master of the handstand pushup. Conqueror of mountains, survivor of deserts and crusader for cheap escapades. Will has been on the road for thirteen years, travelling to far-flung lands on a budget. Today, he runs a number of online ventures, including The Broke Backpacker - the world’s largest budget travel blog. He is passionate about solving the plastic problem and cleaning up the oceans. Currently, Will is based in Bali where he plans to open his first Tribal Hostel in 2020.