Those who want to take awesome, high-octane videos, will love the GoPro HERO5, which is still one of the best small cameras for travel videography!

With the rugged and (nearly) waterproof GoPro HERO5, filmmakers can get those super close-up shots and be right in the middle of the action.

Because of its ultra wide angle lens, the GoPro HERO5 is also a solid choice for when you want to photograph those epic landscapes or very intimate interiors.

Though it’s a few years old and currently supplanted by the newer HERO6, the GoPro HERO5 is still very useful and one of the best GoPros for travel.

In case you’re in a rush – we have give the GoPro HERO5 a solid 4/5 stars – nothing is ever perfect right?

Do You Want to Travel FOREVER??

The GoPro HERO5 is for you if you…

The GoPro HERO5 isn’t for you if you…

If the HERO5 doesn’t sound right for you, check out the OCLU Action Camera which is a very competent budget alternative.

Why the GoPro HERO5 is One of the Best

GoPro was arguably the first action camera to really be popularized. People saw the amazing travel videos that GoPros produced and wanted one for themselves. Utilizing the GoPro’s tiny size and a wide selection of clever Gopro mounts, videographers have achieved some truly crazy perspectives. To this day, some of the most thrilling footage ever recorded is thanks to the GoPro.

The GoPro HERO5 was – and still is – one of the best action cameras available. Combining GoPro’s usual rugged ergonomics with advanced features like touchscreen, voice activation, and 4k recording really took the HERO5 to the next level.

Image & video quality has never been better in a GoPro. The GoPro HERO5’s sensor has improved dynamic range and is better equipped for harsh lighting. For the first time ever in a GoPro, RAW output is also possible – images can finally be edited effectively and competitively. The inclusion of image stabilization also ensures crisp photos and smooth recordings. 4k recording is also possible, which is a must for any professional filmmaker these days.

The body of GoPro HERO5 is also waterproof for up to 30 ft. Many users have reported that the HERO5’s own sealing is unreliable though. Cautious owners should still invest in an external waterproof case.

Where the GoPro HERO5 Falls Short

Many of the problems that have consistently plagued GoPros still haunt the HERO5. Battery life is atrocious. The internal software can be very glitchy and the HERO5’s responsiveness suffers as a result. If these issues are deal breakers for you, try looking at some alternative action cameras.

Finally, a GoPro will never offer the photographic flexibility that a mirrorless or DSLR does. You won’t be able to change the focal range (much) and altering the exposure settings – via the camera menus – is a total hassle. Most GoPro owners are aware of these limitations though and accept the device for what it is.

Want the next generation? The GoPro HERO6 has a better processor and higher resolution when filing 4k.

Is the GoPro HERO5 for You?

Do you want to record thrilling videos? Do you want a camera that can be mounted just about anywhere and in any environment? Then go grab a GoPro HERO5 and start recording! This camera is still one of the best cameras for travel.

What is our final score for the GoPro HERO5? We give it a rating of 4 out 5 stars!

You pop your email here, and we promise to send you only travel content that’s actually relevant — sounds like a pretty good deal to us!

Perhaps the GoPro Hero 5 is the action camera for you. We get that. Thankfully, there are now plenty of decent competitors out there and we have sampled most of them.

What to start capturing excellent 4k footage straight out of the box? Meet the OCLU action camera. This cleverly designed action cam has been turning heads for the last few years – at a cost that won’t totally upend your gear budget for the year. 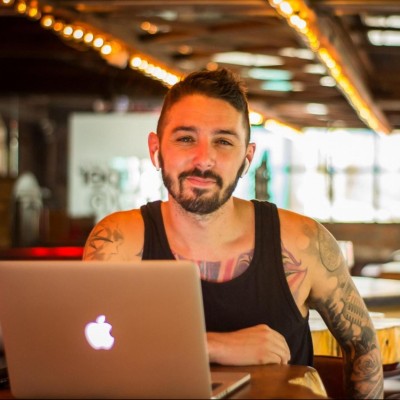 https://www.instagram.com/aaron_radcliffe/
https://www.youtube.com/channel/UCJfVuXfiAGMymTUClEmbFvw
Noodle addict, city dweller, dumpling smasher, and the man with the most extroverted voice you'll possibly ever hear, Aaron Radcliffe is the founder of Nomads Nation - a blog dedicated to digital nomad-friendly gear.

A self-admitted gear junkie, he's an absolute sucker for a good backpack. USA-born, Aaron has is based in Hong Kong and has travelled the region extensively, eating his way rather delectably across East Asia.