Because what’s travel without a little trivia to bust out when you’re sitting around the hostel common room! Tahitian people are vibrant and bursting and Tahiti’s culture reflects much the same excitement. It’s a magical little island with a lot of magical little secrets.

So, without further ado, here they are: 18 facts about Tahiti. Bust these suckers out to either impress or enlighten people. Maybe, you’ll just come across as a know-it-all double-hulled-douche-canoe. Either way, you’re learning!

1. The islands of Tahiti were among the last places on Earth to be settled by humans.

One of my favorite Tahiti facts is about its discovery in the first place.

Some 3,000 to 4,000 years ago, the Early Polynesians (probably from Taiwan or Southeast Asia) ditched their homes and sailed towards the blue horizon until they stumbled upon the Tahitian islands. Imagine throwing everything you own – chickens, dogs, children, and all – into a canoe and sailing into the vast Pacific Ocean with no end in sight. Tahiti’s people have been living there ever since.

Tipairua is the name of a traditional canoe in Tahiti and they play an important role in the Tahititian people’s everyday culture. If you end up visiting Tahiti, definitely make sure to watch a tipairua race.

One of the most unique facts about Tahiti: Early Polynesians founded Tahiti through celestial navigations: reading cloud reflections, wave formations, bird flight patterns, and other aspects. Using these celestial measurements, ancient Polynesian people were able to discover Tahiti without the aid of more modern navigation.

While an important part of the history of Tahiti, this navigational method is now forgotten.

Where is Tahiti? Tahiti is a part of French Polynesia: a dispersed chain of 118 islands and atolls. French Polynesia spans across the vast Pacific Ocean thousands of kilometres from mainland Asia.

4. There is a theory that ancient South American and Tahitian cultures made some type of contact, despite thousands of miles of ocean between them.

This theory is held together because of one vegetable: the sweet potato. The sweet potato originates from Peru and Colombia, yet was found on the Tahitian islands sometime around 300 AD. This is hundreds of years before Europeans made contact with Tahitians. It is suggested that Polynesians travelled to South America and back, or South Americans brought it to the Pacific.

Moreover, in 2006, archaeologists discovered chicken bones in South-Central Chile that radiocarbon-dated to somewhere between 1304 and 1424, before Europeans discovered South America. Because chickens originate from Asia, this suggests that ancient South Pacific cultures had contact with South America.

Further genetic testing has since severed this link, however, leaving the Americas-Polynesia contact theory in a tenuous state.

One of the more fun Tahiti fact is about the symbolism of the tiaré. The tiaré is both a beautiful white flower and an interesting symbol of Tahiti culture. Both men and women wear a tiaré behind their left ear if they’re taken, and their right ear if they’re available.

6. There is no word for “please” in Tahitian.

There is no direct word for “please” because in Tahiti’s language because traditionally, in the culture of many Polynesians, almost everything was shared and there was no need for the word!

7. The Tahitian alphabet consists of 13 letters.

Because the letter ‘B’ does not exist in the Tahiti language, Bora Bora is actually called Pora Pora (first-born), but Pora Pora is heard as Bora Bora when pronounced.

8. Tahitian dance and music is the cornerstone of their traditional culture.

Tahitian dance, called ori Tahiti, is not just a tourist attraction. Dance is a vibrant expression linked to many aspects of Tahitian life since ancient times. The history of Tahitian dance suggests that Tahitians dance for joy, sadness, to pray to a god, to challenge an enemy, and to seduce a mate.

9. The word “tattoo” originates from the French Polynesian word “tatau”.

Another one of my favorite Tahiti facts is the legend of Tohu, the god of tattoo, who painted all the oceans’ fish in beautiful colours and patterns. In ancient times tattoos were significant symbols of social status and initiation rites as well as representations of community, geographic origin, family, and clan membership. Warriors also tattooed their faces to intimidate their enemies.

Not so much a Tahiti fact as a world fact, but influence by Europeans and colonisation by the French brought turmoil to the Tahitian people – go figure. Although today Tahiti enjoys a fairly stable economy and standard of living, the initial introduction of technology such as guns and alcohol, as well as many fatal diseases, wreaked havoc on the population of Tahiti.

Many Tahitian people died from the influx of smallpox, influenza, and typhus and – as in many indigenous cultures globally – effects of this interference still show.

Get insured before traveling to Tahiti!

Oh, shit, sorry guys. Was that a political opinion? Oops, my apologies; allow me to take the heat off of the destructive nature of Western influence in the East. Ad time!

Jokes aside, if you’re traveling, you should get insurance. Shit happens; just ask the Tahitians. They didn’t have insurance and look at what happened to them!

World Nomads’ mission is to support and encourage travellers to explore their boundaries. They offer simple & flexible travel insurance, and safety advice to help you travel confidently.

They’ve been doing it since 2002 – protecting, connecting, and inspiring independent travellers just like you.

Get a quote below or read our in-depth review!

One of the little known facts about Tahiti is that the world’s first overwater bungalows were constructed there in the 1960s… buuut not by the Tahitian people. It was three American dudes. Damn.

Gender politics be damned; here’s a crazy fact about Tahiti! In Tahiti (and other Polynesian culture), you’re likely to meet men, women and a third sex (mahu or raerae): men raised as girls.

Mahu are men who continue to behave and dress like women throughout their lives. The Tahitian people regard Mahus as people who combine the best of both the male and female gender. Raerae refers to more flamboyant transvestites and can be less accepted by society than mahu.

13. Hawaii receives more tourists in a day than Tahiti does in a year.

One of the more interesting facts about Tahiti is how little people visit Tahiti despite its immense beauty. Tahiti is one of the hardest places to reach in the world, but once you do you will be able to travel the island with relative ease and little crowds.

This kind of isolation makes backpacking French Polynesia a complete dream. Of course, you should go there! It’s goddamn spectacular!

Is This the Best Travel Pack EVER???

Tahitians consume a lot of seafood, such as tuna, swordfish, korori (pearl oyster meat), and prawns. Their preferred meat is Pua (pork), and most chicken and beef is actually imported.

Vegetarians can easily find mangoes, avocados, papayas, bananas, and exotic fruit like soursop and star fruit throughout the islands.

A popular Tahitian dessert is poe, a sweet pudding made of taro root, flavoured with banana, vanilla, papaya, or pumpkin, and topped with coconut milk.

Tahiti demographics also suggest that Tahiti is one of the most obese countries in the world!

One of the many things to do in Tahiti is watching the pirogue (va’a) teams training on the lagoons. Be sure to catch the traditional races and festivities in October and November.

Other sports in Tahiti include amoraa ofae (rock lifting), and, of course, surfing! Tahiti’s surf is world-renowned and attracts carvers from all around the globe.

16. The official languages of Tahiti are French and Tahitian.

While Tahitians official languages are French and Tahitian, they also speak English on most of the islands.

17. It should come as no surprise that most of Tahiti’s wildlife lives in the sea.

A few Tahiti facts about their wildlife:

Drink water from ANYWHERE. The Grayl Geopress is the market’s leading filtered water bottle protecting your tum from all the waterborne nasties. PLUS, you save money and the environment!

Single-use plastic bottles are a MASSIVE threat to marine life. Be a part of the solution and travel with a filter water bottle.

We’ve tested the Geopress rigorously from the icy heights of Pakistan to the tropical jungles of Cuba, and the results are in: it WORKS. Buy a Geopress: it’s the last water bottle you’ll ever buy.

Buy a Geopress! Read the Review

French Polynesia’s capital, Papeete, is the biggest city in Tahiti; however, it is not a large city. It’s more like a medium-sized town by Western standards.

Things to do in Papeete include:

As you can see, there are tons of interesting facts about Tahiti! Polynesian cultures are truly fascinating and criminally unengaged with within the traveler community. The sad truth of many of these Pacific Island is that they’re only ventured to for a beach holiday with some pretty accompanying photos.

If these interesting facts about Tahiti left you intrigued in traveling there, I’d highly recommend you do, and possibly go on to other parts of French Polynesia. No matter where you stay around Tahiti, you’re bound to be greeted by friendly, local people and learn more about Polynesian history! The beautiful weather is an added bonus too.

Many of the places to visit in Tahiti can be expensive (like Bora Bora and Moorea), but there are many islands that guarantee backpackers can find raw beauty, empty beaches, and Tahiti nature, even on a budget. If these Tahiti facts inspire you to visit more of the South Pacific Islands, check out our ultimate Galapagos Islands Budget Travel Guide for some more majestic goodness. 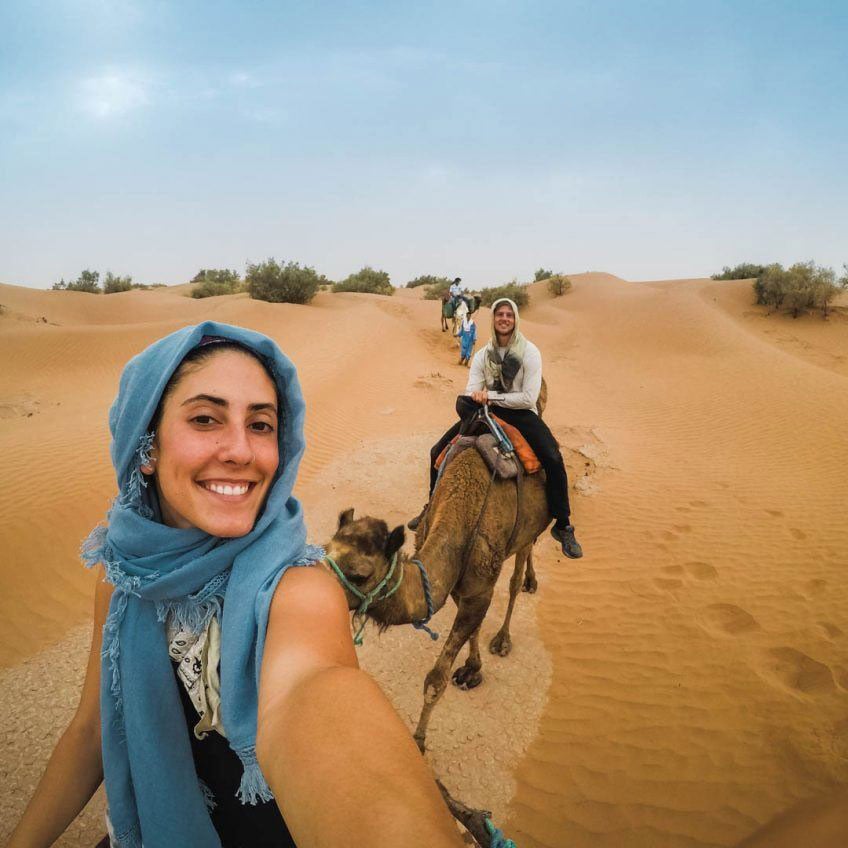 Pinterest
Twitter
Facebook
Baby, it's your time to shine!
Enjoy up to 60% discount on selected hostels worldwide.
View on Hostelworld
Looking for travel inspiration?
Here's 23 places to go in 2023.
Read the Post
Back to top