You’ve been backpacking for months, scrimping on money by hitchhiking, eating at street stalls, and couch surfing as much as possible. You check your online banking and you’re on the last of your savings and the trip looks like it could be drawing to a close. You’re in need of food, fresh clothes, and getting your hands on something to sell for a little extra cash – but what is a hungry backpacker to do?

Well, the latest frugal backpacking trend could be for you. Get yourself some free food, clothes, furniture and more by heading out into your local area for a spot of dumpster diving. Yep, diving into trash… well, not exactly.

Dumpsters once known as the graveyard for diapers, coffee grounds and all kinds of stinky garbage that I don’t even want to mention can also be your own personal treasure chest when at the end of the line finance wise. All it takes is a little bit of (sometimes very messy) hard work, patience and time.

What is Dumpster Diving?

As the name suggests, dumpster diving is the trend of foraging for food or valuable items in dumpsters or trash. In many countries, dumpster diving has gone from a taboo to almost part of the mainstream culture, especially amongst travellers!

Whether you need more clothes, food, or are looking for something valuable to sell on for cash, dumpster diving is the thing to be doing.

Anyone who wants to live a little more frugally – from backpackers, to students, to people simply living on a budget. Dumpster Diving is also very big for people who want to live a sustainable lifestyle. These people refer to it as urban foraging. Over one third of the food thrown out in dumpsters is perfectly edible and it’s just sad that so much food goes to waste each year.

1.3 billion tons of food is wasted every year and ends up in landfills. This is a ridiculous dollar amount of wasted food! In the United States we throw away $165 billion worth of food each year! So many people these days who dumpster dive do it to save this waste food from being thrown away. If you’re backpacking the world on $10 a day, dumpster diving is a useful trick to save some cash!

Becoming a pro dumpster diver, if you know where to look, can be very fruitful for someone hard up on cash – providing anything from a fresh meal to as-good-as-new clothes.

How to get it right

Before you begin finding treasures in the trash, first, you need to know the laws on dumpster diving to make sure you don’t get in any trouble. Rubbish is not considered as private property, so you won’t be charged with theft if caught dumpster diving, but you should be careful of trespassing.

Trespassing and scavenging laws greatly differ depending on where you are, so do some research on your local area to inform yourself on the laws and what’s considered acceptable before setting out. Often, dumpster diving is a bit of a grey area where the law is concerned. Don’t make yourself look suspicious and if you do encounter law enforcement, be respectful and follow their instructions – if they ask you to leave, then leave. Be aware also that some business enforce these rules and some don’t.

I recommended going dumpster diving early in the morning, right after sunrise. Less employees are around at these hours to interrupt and lots of grocery stores throw out their day old food stuffs first thing in the morning. It’s easier to see, obviously early in the morning too than trying to pack a flash light and crawling around in smelly garbage at night.

Supermarkets throw out tones of perfectly edible food every day, just because the label says an item has exceeded its use-by date. Find your local supermarkets dumpster to scavenge fresh food for a totally free – often you’ll be surprised by what you find.

When students move out of their college dorms, they throw a huge amount of stuff out – from bedding to furniture. Check out college dorms just after students have moved out to bag yourself some free furniture that is almost always as good as new.

Once you start dumpster diving, you’ll discover there’s a community of other street scavengers who do the same thing and want to share their knowledge with you. Check out online forums for your local area for tips on the best places to go and when – just make sure you contribute information for others as well!

What to look for

What you can find on a dumpster dive varies depending on where you are and where you look, but some universally useful things you could look out for include:

Be careful when dumpster diving! I recommend just going with foods that do not expire as this could be an easy way to pick up a stomach illness in a foreign land and lets face it, medical bills are expensive! If perishable products get over forty degrees you have a pretty good chance of picking up harmful bacteria and a case of the bathroom blues.

If what you are pulling out of the dumpster does not smell good, just leave it! It’s not worth the risk! Examples of safe foods to pull from dumpsters for consumption are canned goods, boxed cereals, slightly bruised fruits and breads. Good foods to avoid are seafood, sprouts, meat, dairy and unpasteurized juice.

At the same time, I have friends who found perfect Thanksgiving free range turkeys from the Trader Joe’s dumpster in Santa Monica California the last two Thanksgivings! These same friends donated an entire carload of the food they scavenged to the tent city on Third Street in Santa Monica! What a fantastic way to use dumpster diving to spread the wealth!

It can be hard to overcome the idea that dumpster diving is dirty and unhygienic – after all, many people throw out things for a reason! However, once you get over that mindset, you’ll discover how many items of real valuable can be scavenged after a bit of planning and research.
Follow these tips for happy dumpster diving:

Look for things that aren’t in dumpsters

If the idea of actually rooting through a dumpster doesn’t appeal, ease yourself in by scavenging items placed around the dumpster but not actually in them. This could include larger items of furniture, recyclables, and sometimes even crates of food around supermarkets.

What to wear while dumpster Diving

Dumpster diving is not a fashion show. The best thing to wear for dumpster diving is an old pair of coveralls. For hygiene and safety reasons, you’ll need to wear at the very least long trousers and sleeves, and closed-toe footwear. No flip flops and definitely no heels! Wearing protective clothing (especially work gloves!) will help you stay safe while dumpster diving.

Wearing thick work gloves will protect you from cuts and dirt. Be live me there is some germ filthy things you don’t want to touch with your bare hands in dumpsters! (Among the treasuries that is!) If you rock up in shorts and flip flops, unprepared for a morning of dumpster treasure finding fun, you’re not going to have a great time!

You can also bring useful equipment that will make scavenging that bit easier for you. Items you could bring include:

If you plan to have a full night of diving, having a form of transportation to get you and your finds home will come in useful! If you’ve got a bike it will do, but a car will provide you with more room and get you home faster.

Dumpster diving can be dangerous – if someone’s thrown out something sharp and you handle it carelessly, you could end up getting seriously hurt. Make sure you handle everything with care and look out for any objects that could cause you harm such as broken glass, used needles, and sharp metal.

Clean up after yourself

After you’ve scavenged an area, be sure to clear up after yourself out of respect for your local area and the reputation of the scavenging community. That means putting any trash bags back in the dumpster, and ensuring you’ve left the area as you found it.

I used to work for a hugely popular UK based grocery store and we constantly had dumpster divers making a giant mess! It was such a pain for employees to have to clean up the trash thrown everywhere and the mess left behind. This is why dumpster divers get a bad name! Don’t be that person! Leave the dumpster as clean (Ha ha) as you found it.

With just a few tips for the newbie dumpster diver you will be a scavenging pro in no time!

Happy dumpster diving – let me know what you find!

P.S. Some people have found art, cash, rolexes and even god-damn gold in the trash… Keep an eye out! 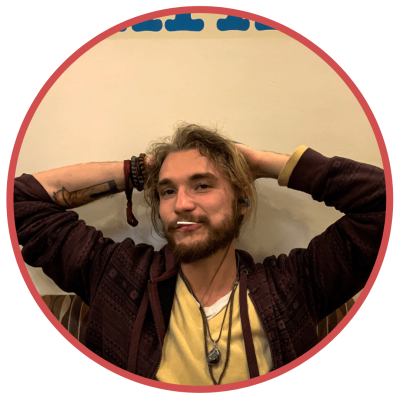 https://www.instagram.com/themanwiththetinyguitar/
A man who appreciates the simple things in life: free food from trash cans, nights out under the stars, and befriending street animals. He goes on ridiculous adventures and then writes about those adventures so you can also go on ridiculous adventures! Ziggy has minor fame status throughout Asia for his incessant ukulele playing. Follow me on Instagram - I post photos sometimes-almost-never. Wanna get in touch? Head over to my website and hit me up. We can talk or just send each other photos of cats.