Colombia remains one of my favourite countries of all time!

I first visited Colombia in 2014 and quickly fell in love with the lush landscapes, fun loving people, crazy parties and skilful games of frogs (more on that later). I’ve been desperate to return to South America for a while now and in January 2019 I thought ‘fuck it’ and booked a flight out to Medellin…

The plan was to spend a few days here before heading making my way slowly to Peru where I would embark on an epic trek through the Andean mountains. I quickly found myself really enjoying the city of Medellin though and with Ditch Your Desk co-founder Aaron Radcliffe also staying in the city, it made sense to stick around and work. We worked during the days and then usually started drinking around 4pm. It was a beautiful system… 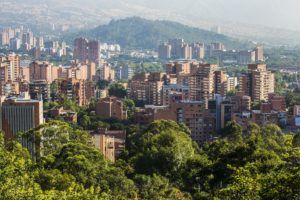 The next ten weeks in Colombia passed by in a blur of awesome. Eventually, I made it out of Medellin and headed to the Caribbean coast where I spent a few weeks exploring Santa Marta, Minca and Tayrona.

Although I had spent a couple of months backpacking in Colombia in 2014 and 2015, this MASSIVE country still had plenty to teach me, read on below for eight things I learnt in Colombia!

1. Frogs is the greatest game of all time!

Welcome to the Temple of the Frog. Call me Señor de la Rana.

Rana (frog) or Sapo (toad) is the greatest game of all time… This involves throwing a metal disk into a metal frog’s mouth. It is almost impossible. In thirty plus hours of gameplay, I only succeeded in doing it twice. Luckily, there are other targets you can aim for. Different holes in the board all have different scores. I fell so incredibly in love with this massive game that I had one specially made and brought to Bali. It now lives in my garden and I play a few games of frogs with some drinks every week with my friends. I’m happy to report that Tribal Pererenan (my first Tribal hostel in Bali) will have its own on-site frogs game!

I ONLY drink gin, soda and lime. When I headed over to Colombia I assumed I wouldn’t be drinking much for a couple of months. How wrong I was… you can get good quality gin (Hendricks) all over Colombia and I came across a TON of specialty gin bars. Win for gin!

3. Pink Cocaine is a thing! Yessir, you read that correctly! I’m not sure exactly what the origins of this are but I’ve been informed that it is an attempt by somebody to create a BRAND in the admittedly fairly BLAND (haha, puns) world of cocaine visuals.

I have been reliably informed by my good Australian friend, Phil Gatton, that pink cocaine tastes slightly of pink food colouring and that, other than that, it works as advertised.

4. It’s illegal to be outside in Colombia without your passport

This was something that nearly got me into big trouble. For you see, Colombian cops are often of the corrupt variety and they like to target foreigners such as myself in the hopes of extracting a bribe. We experienced this one night when Phil, my buddy Art and I were making our way home.

Phil had just finished his tasty pink cocaine and deposited it into a trash can (littering is bad, guys). Literally ten seconds later Phil, Art and I were stopped by two cops. There was nobody else in the street, it was about two in the morning. The cops insisted on patting us down, checking our pockets etc. Phil, perhaps overly confident and not a fan of cops at the best of time, may have been a little bit overly enthusiastic in his loud proclamations that ‘I haven’t got anything bro, you can search all day’.

The cops did not like this and so they switched to plan B. They wanted to see our passports. We explained that our passports were back in our hostel dorm, why on earth would we roam the streets with our passports on us – it was asking for trouble. The police lit up like two rather evil Cheshire cats. Surely we knew it was illegal to not have documentation on us – we should at least have photocopies of our passports.

This is when my good friend, and now my apprentice (I hired him after this), Art leapt into action with his flawless Spanish and gracefully extracted us from the situation. Art, I salute thee. Turns out though, you really MUST have a photocopy of your passport on you or you risk being shaken down by the police.

I felt fairly chill the whole time as I had a large bribe hidden on me in my security belt, alongside all of my weed. I should have folded up a photocopy of my passport and held that in there too. This belt is fucking amazing and has survived several police encounters without detection. You can buy one here – I highly recommend you do so. 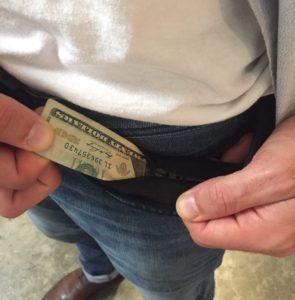 Putting this sleek money-smuggler to work.

5. Medellin is the digital nomad centre of South America

If you want to pause and work a while in South America, the popular backpacking city Medellin appears to be the place to be! I met a pretty good crowd of digital nomads and online entrepreneurs working out of Medellin and while I couldn’t do it long-term myself (too many distractions), it is a solid place with good food, coworking spots and reliable WiFi where you can pause for a while and get some work done.

Some guy working in Medellin

6. Colombia is a land of MANY climates…

OK, So I already knew this but I’m throwing it in here for your benefit. Colombia is BIG! If you are planning on a trip here and will be moving around a fair bit, be aware that you will want warm clothes and summer wear all in one trip! Colombia has landscapes ranging from humid to dry, sweltering to frigid, this is a land of soggy jungles, scorched beaches and sunny cities – come prepared. 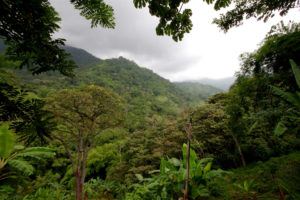 A sea of green lush jungle.

You probably already know this but Colombia is pretty safe. Avoid walking around late at night on your own – instead take an Uber, they are cheap and plentiful! It is of course well worth sorting yourself out with decent travel insurance but besides that, don’t freak about any of the bad thoughts you may have about Colombia – they are about twenty years out of date, it’s a mostly safe, chill place filled with awesome humans.

8. There are some WILD party hostels in Colombia!

I stayed in a few REALLY very cool hostels in Colombia – not all of these were party hostels of course but if you’re looking for a party hostel, Colombia has some of the best in the world. 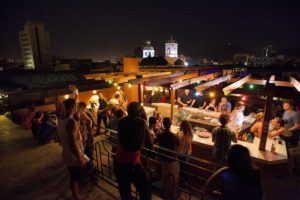 And so that’s that amigos, some lessons from my time in Colombia! Keep an eye on this space as I’ll be posting more tales from the road soon! Check below for plenty of epic Colombia travel resources…